You are here: Home / Windows / From Inception to Perfection: The History of Fibrex®

Fibrex® is one of the greatest innovations ever brought to life by Andersen, the parent company of Renewal by Andersen® of Denver. This amazing framing material combines the rigidity and stability of wood with the low-maintenance features of vinyl. Thanks to its exceptional strength and moisture repellence, Fibrex-made windows can stay attractive, weathertight, and energy-efficient even with long-term exposure to harsh elements. Looking better and lasting longer, this exclusive composite material is engineered to function as intended for a very long period with practically no maintenance.

Despite the way Fibrex changed the game so dramatically, it’s actually more evolutionary than revolutionary. To understand how Fibrex has become the unparalleled material that it is today, let’s go back in history:

The latest ‘50s saw Andersen scientists lay the groundwork for Fibrex through the process of elimination. It started when experts learned about aluminum’s high conduction of heat and cold and gave up on using it as a window material. It was also the time when Andersen first developed the hollow vinyl window in America. The company saw bright potential in its remarkable insulation and low maintenance properties but wasn’t pleased with its poor structural integrity.

The new decade came, and Andersen created the clad-wood window category in the market. The company’s R&D invented a technique to weld the corners for weathertight performance.

However, the price of wood increased by 400% during latter part of the 60s. To continue using wood due to its superior strength without breaking the bank, Andersen decided to reclaim wood fibers. The company developed engineered wood for hidden window components and discovered such material was stronger than raw timber.

Unlike many window companies at the time, Andersen developed a sustainable mindset. It saw the amount of “unusable” wood pieces its manufacturing facilitates produced. Instead of treating them waste, Andersen used the wood leftovers as a material resource.

It began developing sash made from reclaimed wood fibers and thermoplastic polymers. The new material showed functional brilliance, proving to perform and weather well. But to the inefficient manufacturing methods then, Andersen needed to develop improvements over the next decade to perfect its new creation.

In 1991, Fibrex was patented and went on to become one of Andersen’s most notable claims to fame. When Renewal by Andersen was founded in 1995, Fibrex became the framing material of choice by Andersen’s newest window replacement division.

Fast-forward to present day, the bar this patented composite material raised since its introduction has yet to be exceeded. After nearly three million Fibrex-made replacement windows installed, Renewal by Andersen, along with Andersen, continues its quest to be different and better.

Learn more about Fibrex and see a sample first-hand, schedule your free consultation with Renewal by Andersen of Denver. Call our Colorado Springs office at (719) 313-5403 or our Denver, CO, office at (303) 968-3287 now. We’ll be glad to set out initial visit at your convenience. 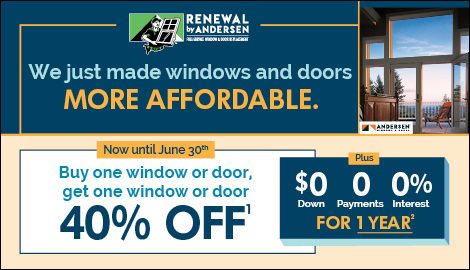 Fibrex “Green” Fabricated Replacement Windows for Denver Area Homes FIBREX is a revolutionary breakthrough in the window industry. This composite material is only available from Renewal by Andersen, and is engineered to be durable, long lasting and, low maintenance. The material is a blend of … END_OF_DOCUMENT_TOKEN_TO_BE_REPLACED